Irini just turned six (which I absolutely refuse to believe – how did that happen??!!) and of course, that brought up the vexing (first world) problem of what to get for her birthday. We really didn’t want to buy her any more toys, and she has enough clothes, so that ruled out a lot of things. I wanted to get something that could inspire her creativity, and when I saw how excited she was about a fairy door in her classroom (through which a special fairy visits and leaves notes and such), I thought that a fairy garden would be fantastic. It would be great for her imagination, and it was something that she would have to nurture and look after, making it a great teaching tool as well.

The starting point was finding a suitable container for the fairy garden. I was originally going to use a large shallow saucer style pot, but when I saw this mini greenhouse at Ikea, there was never any other option! Isn’t it just darling with its Scandi styling, and glass on three sides? It was the perfect size – 46cm (18″) wide, 18cm (7″) deep, and 46cm (18″) high – so it would fit a nice arrangement of plants, but not be too big to fit in her room, as you can see above. The only downside was the front cut-out detail, pretty but not so practical, but this was easily fixed by lining the inside with heavy plastic.

To build my fairy garden, I started by using terrarium principles. The first layer in the greenhouse was a good one inch of aquarium gravel to provide drainage, and stop the roots of the plants sitting in wet soil. You could also use pebbles or rocks, and there are some artificial substitutes that are lighter in weight but still just as effective. Next comes a good sprinkling of activated charcoal (I found mine at an aquarium store) which works almost as a filter, and will keep the garden smelling fresh. The final base layer before I added potting mix was a decent covering of damp spaghnum moss (found at the garden centre), used for both its water retaining properties and as a screen to stop the potting mix from falling into the gravel. Finally, I filled the remaining space with potting mix. I just used a general mix, but you can also buy specific terrarium blends.

After the prep comes the fun stuff, actually creating the garden. My original sketch had a fairy door at one end, a little seating area at the other, and a path joining the two together. My first stop was plant shopping, with my only caveat being the plants had to be suitable for shade/indoor conditions. The first plant I came across was this gorgeous shade loving ground cover sprinkled with pale blue flowers (you can see it on the left) and I imagined it as a fairy meadow, perfect for the seating area. I then found the fern and the little pink leaved plants, and that was my door area sorted. Finally, I looked for filler plants and the taller plants with the white flowers added some height (and reminded me of holly hocks), while the violas and lobelias added dainty little lilac and white flowers to the mix.  Planted in place, and watered in well, I was happy with the arrangement!

My starting point was a darling fairy door and red toadstools that I ordered from Kim at The Magic Toybox. She hand makes all of her gorgeous fairy items to order in Tasmania, and was sooo helpful when I rang her asking her help since I needed these items in only a few days. The door has an incredible amount of detail, including wood graining, and little tiny lock, and subtle gold and silver swirls of fairy dust. Placed in front of the fern, flanked by the pink leaved plant and teeny little lanterns from My Little Fairy Garden, and with a path made from blue mosaic tiles, the entrance to fairy land was complete.

Speaking of My Little Fairy Garden, the remaining accessories also came from them. Located a short distance from Perth, they have a large assortment of fairy garden accessories, especially ones that may be more suited to an adult garden, but none the less, were perfect for what I had in mind. As well as the two lanterns you saw earlier, I also bought this rustic little bench, the bird bath, the rusty fence, and the teeny bird (part of a set of 3, with the other two to make surprise appearances down the track!).

The final touch was a paper butterfly garland attached to the outside of the greenhouse to add another layer of interest, as well as a scattering of river pebbles and glass gems, including in the bird bath to look like water, and the fairy garden was complete!  I am happy to say that Irini was thrilled, and so far we’ve had conversations about what plants need to survive, she’s written a letter to the fairies, and has even tidied up (her already pretty tidy) room so that it is perfect for her garden now that we’ve placed it in her room. So, not only was it something that she likes, it is also helping teach her important lessons in many areas. Definitely a win all round!! 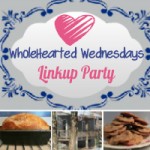 Hope In Every Season’s Homemaking Party